The Maluti Mountains, also spelled Maloti (Afrikaans: Malutiberge), are a mountain range of the highlands of the Kingdom of Lesotho. They extend for about 100 km into the Free State. The Maloti Range is part of the Drakensberg system that includes ranges across large areas of South Africa.

The range forms a high alpine basalt plateau up to 3400m in height. The highest point, 3482 m high Thabana Ntlenyana, is located in the north-east of the range. It is the highest peak of Southern Africa, and the highest in Africa south of the Kilimanjaro.[1] The 3291 m high Namahadipiek, the highest mountain in the Free State, is also part of the Maluti Range. Snow and frost may be found even in summer on the highest peaks.

The sources of two of the principal rivers in South Africa, the Orange River, known as Senqu in Lesotho, and the Tugela River, are in these mountains. Tributaries of the Caledon River, known as Mohokare in Lesotho, which forms the country’s western border, also rise here. 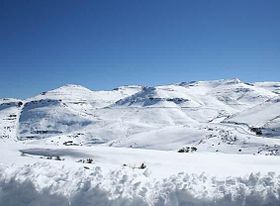 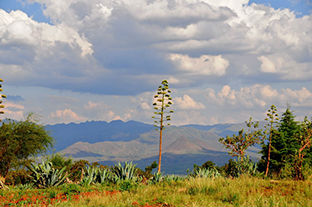 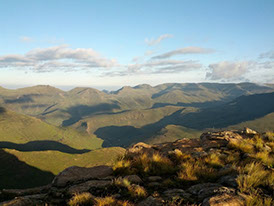 The Golden Gate Highlands National Park includes parts of the northeastern end of the Maloti Range. Other parks in this high mountain area are the Sehlabathebe National Park in Lesotho and the uKhahlamba / Drakensberg Park spanning parts of both KwaZulu-Natal province and Lesotho. These parks are part of the Maluti-Drakensberg Transfrontier Conservation Area.